With the Battle of the Bulge underway in Europe, reinforcements were needed. At Southampton, at 0200 (2.00 AM) on Christmas Eve 1944, 2235 men from the U.S. 66th Infantry Division started to trudge wearily up the gangway of the tired old Belgian troopship SS Leopoldville. Built in 1929, she was a veteran in carrying troops to battle. Already her log recorded 24 successful Channel crossings, and 120,000 troops had made that journey safely.

But this was to be her last tragic voyage. 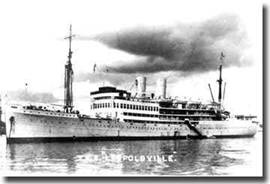 After weeks of hanging around in camp in the southern part of England, at long last, on the 23rd of December 1944, the 262nd and 264th Regiments, part of the U.S. 66th Infantry Division, were on the move, ordered to embark for France. The young troops drawn from almost every state of the United States hurriedly packed, were rushed off to the docks of Southampton, now left in typical Army fashion to wait and wait around over the next six hours.

Now came the order to embark at 0200 (2.00 AM). Another troop ship, Cheshire, was also involved in loading troops. But there seemed to be no plan or structure to this embarkation. The two regiments were mixed up. One might expect that troops from one company would stay together, but not so. As troops arrived, they loaded randomly; chaos reigned supreme. Much later, after Leopoldville was torpedoed, this haphazard loading pattern compounded the problem: who were missing? who might be in Cheshire? There were no records, no one knew the answers.

Leopoldville had to date led a charmed life, never subjected to enemy fire in her 24 Channel crossings, safely delivering 120,000 troops. Her master, Charles Limbor, had been in command since 1942. This was expected to be just another routine crossing from England to France.

As usual, troops were crowded onto benches fitted in the converted cargo hold; another 18 hours would see this voyage completed. The young soldiers, mostly around the age of 21, crowded the rails to get their last glimpse of England as the ship pulled away from Southampton docks at 0900 (9.00 AM).

It was the 24th of December 1944, with Christmas but a few hours hence. They little dreamed of the disaster soon to unfold.

The ship's broadcast system called the troops on deck for boat drill but a number of them either did not hear or heed this call. Those in charge did not seek out those not present and a very cursory drill was performed, e.g., launching both lifeboats and rafts was not explained or demonstrated, and only a few on deck were told how to properly enter the water while wearing a life jacket. All in all a very unsatisfactory boat drill; one would think essential when the troops carried were soldiers, quite unused to life on board a ship.

The escort commander sailing in Brilliant ordered the formation to zigzag. Never before had Leopoldville been odered to zigzag on any of her previous crossings, but with enemy submarines operating in the vicinity, it seemed a prudent order.

Now at 1430 (2.40 PM) Brilliant reported an ASDIC contact, the two troopships sounded action stations, and the destroyers rushed off to drop depth charges. But after 15 minutes the alarm was called off, only to be reinstated again at 1500 (3.00 PM). But in another 10 minutes the previous formation was resumed and the group pressed on at 13 knots.

Position of the sinking of SS Leopoldville,
off Cherbourg on Christmas Eve 1944.

U-486 Lurking Off Cherbourg.

Oberleutnant Gerhard Meyer and his crew in U-486 had launched the boat on the 12th of February earlier that year, and had sailed from Kiel for Norway on the 6th of November 1944 to go on patrol via Bergen, then sailed west around Ireland. Now they lay in wait for Allied shipping off Cherbourg. They had recently tasted success by accounting for their first victim, the British Silver Laurel, now they waited patiently for the next victim to enter their web.

Leopoldville obliged by coming into range about 1754 (5.54 PM) when a torpedo was fired. Meyer took the boat deep to await the inevitable depth charge attack. His torpedo ran truly, smacking into number 4 hold on the starboard side of the troopship. Compartments E4, F4, and G4 all flooded, with the access ladders to the upper decks in general destroyed. Of the 300 troops in these areas, only a few managed to make it to the safety of higher decks.

Announcements over the loud speaker system were contradictory: a tug was on its way to help, troops would be taken off to other ships, now it was stated the ship was NOT sinking.

Those in authority did not take charge of the situation. The ship was drifting toward a minefield, and at 1816 (6.16 PM) Brilliant ordered the torpedoed ship to let go an anchor. At 1825 (6.25 PM) the master ordered all but essential crew members to abandon ship, although it was certainly not apparent that the ship was sinking.

But the sight of the crew taking to the lifeboats, lowering them, and pulling away from the stricken vessel did nothing to instill confidence in the U.S. troops crowded on deck.

Brilliant found that the U.S. troops ashore in Cherbourg only some five miles away were operating their radios on a different frequency from the British, and the destroyer had to get in touch with Portsmouth authorities to ask them to relay the call for help from ashore in Cherbourg.

What a communications mess, not the first time in World War II that Allied forces could not speak to each other in a time of crisis, because of some different frequency, operating procedure, or lack of necessary equipment. In 1942, at the Battle of Savo Island, cruiser HMAS Canberra did not receive a warning of "Enemy Ships Entering harbor" sent by USS Patterson on her Talk Between Ships phone, simply because Canberra did not carry that equipment. If it were not so serious it would be laughable!

It took over a precious hour for the message from Brilliant via Portsmouth to get to Cherbourg by telephone. One can but assume and hope the German armed forces suffered from similar misshaps in their communications set up.

No convoy ships tried to raise Cherbourg by means of signal lamp or Morse code, but Cherbourg tried to reach the convoy vessels by such means. But no one was keeping a watch for such a message, so all to no avail.

At long last at 1825 (6.25 PM), Brilliant signalled: "Leopoldville hit, need assistance." When asked what kind of assistance was required, no response was forthcoming. It was unbelieveable: no lookout kept, no reply to serious questions, no proper description initially of what help was needed.

The very fact that it was Christmas Eve, on that day and at that time, compounded the problem. Ashore it was holiday mood, hundreds of small craft tied up in the harbor could have quickly gone to Leopoldville's aid, but crews were minimal, the crafts' engines cold, shore base staff also at minimum levels, all off to holiday parties, in a let-us-forget-the-war mode, totally switched off.

At 1825 (6.25 PM) Brilliant went alongside Leopoldville. Some lifeboats that were still turned out on their davits became a problem, and the two ships coming together in the lively sea crushed them like matchwood.

The ships drifted apart and hundreds of young soldiers tried to leap the gap between both ships to safety. Alas some did not make it and were crushed as the two ships pounded together once more.

At 1920 (7.20 PM), crowded with an extra 500 souls, Brilliant pulled away from Leopoldville, as finally the first rescue craft from Cherbourg were on their way.

The rest of the escorts were still chasing after U-486, intent on keeping her submerged.

John Pringle, commanding officer of Brilliant and convoy commander, considered that the rescue craft could collect the 1,200 or so troops still on board the troopship; this judgment was later to be questioned.

About 2030 (8.30 PM) two explosions from deep within Leopoldville were heard, and the ship heeled sideways and sank by the stern. Many of the troops were swept into the cold, rough waters off Cherbourg. Wearing heavy overcoats and carrying equipment, the soldiers were soon in trouble and many drowned. 1,400 infantrymen were saved but 783 had lost their lives, the greatest loss suffered by U.S. servicemen at sea. 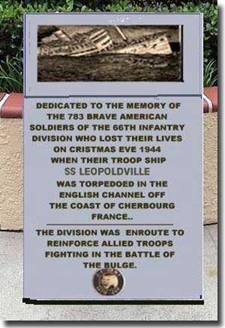 Plaque for Leopoldville victims for the monument at Veterans' Park, Titusville, Florida.
It is noteworthy that on the plaque "Christmas" is spelled incorrectly. 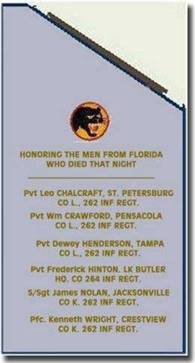 The men from Florida who died in the sinking of SS Leopoldville. Titusville, Florida.

On the 12th of April 1945, U-486 received her comeuppance. Forced to surface by malfunctioning snorkel equipment, she was torpedoed by the British submarine Tapir, and all 48 of her crew were lost.

An Allied Wall of Silence.

In general, both the British and the United States authorities did not see fit to release the true details about the sinking of Leopoldville. It took until 1958-59 for U.S. military documents about this disaster to be declassified.

In 1984 Clive Cussler with his shipwreck organisation, the National Underwater and Marine Agency (NUMA), found the ship at 49 degrees 44. 01 minutes N and 01 degrees 36.40 minutes E, different from where the wreck had been previously marked on charts. 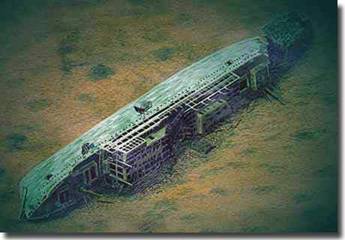 The wreck of Leopoldville found in 1984 by Clive Cussler.

In 1996 the British released some of their documents on this incident, but not all.

If countries wish to hide their tragedies of World War II where events have been bungled, it is easy to delude the families involved and the public in general. We need to be forever vigilant in obtaining the truth in such cases. Relatives of service personnel who die in such incidents deserve to know the true facts and not be fobbed off by lies and half truths.

As Clive Cussler aptly described the Leopoldville sinking, "Forgotten by many, remembered by few."